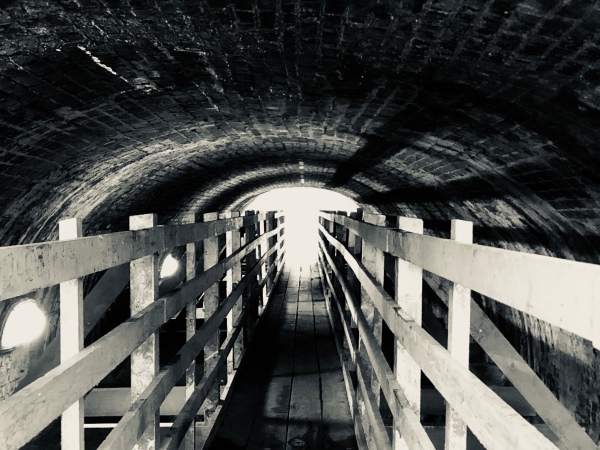 The Loughton Valley end entrance to the tunnel

Looking back to the entrance

I’m not sure if it’s the claustrophobically low roof or the water that drips down from it that makes this such an unsetting space to pass through, but there’s definitely something uneasy about the wooden bridge that passes through Tunnel 170 at Bradwell. It was closed recently for engineering works, but to me it looks exactly the same as it always has done… ancient, threatening and dark, with the river running underneath and trains thundering by overhead.

I’ve not been able to find much about the history of the tunnel, if there even is anything of note. I know that the stations nearby at Bradwell and Great Linford closed in the 60s, and that the railway is now part of the redway network. (I have a whole piece on the redways ready to post at some point, but that’s for another time!)

There’s a point halfway along the bridge where I always seem to hear a rhythmic thump from above, like train wheels rattling over tracks. However, I think that modern trains whoosh along rather than canter, so it’s probably some trick of the acoustics reflecting back my own footsteps from the curved ceiling. It’s one of those spots that I don’t feel comfortable lingering, especially if I’m out on my own – even though you can see both ends of the tunnel clearly, it feels like there’s someone just behind me all the time. It’s always something of a relief to come out into the light at the end.