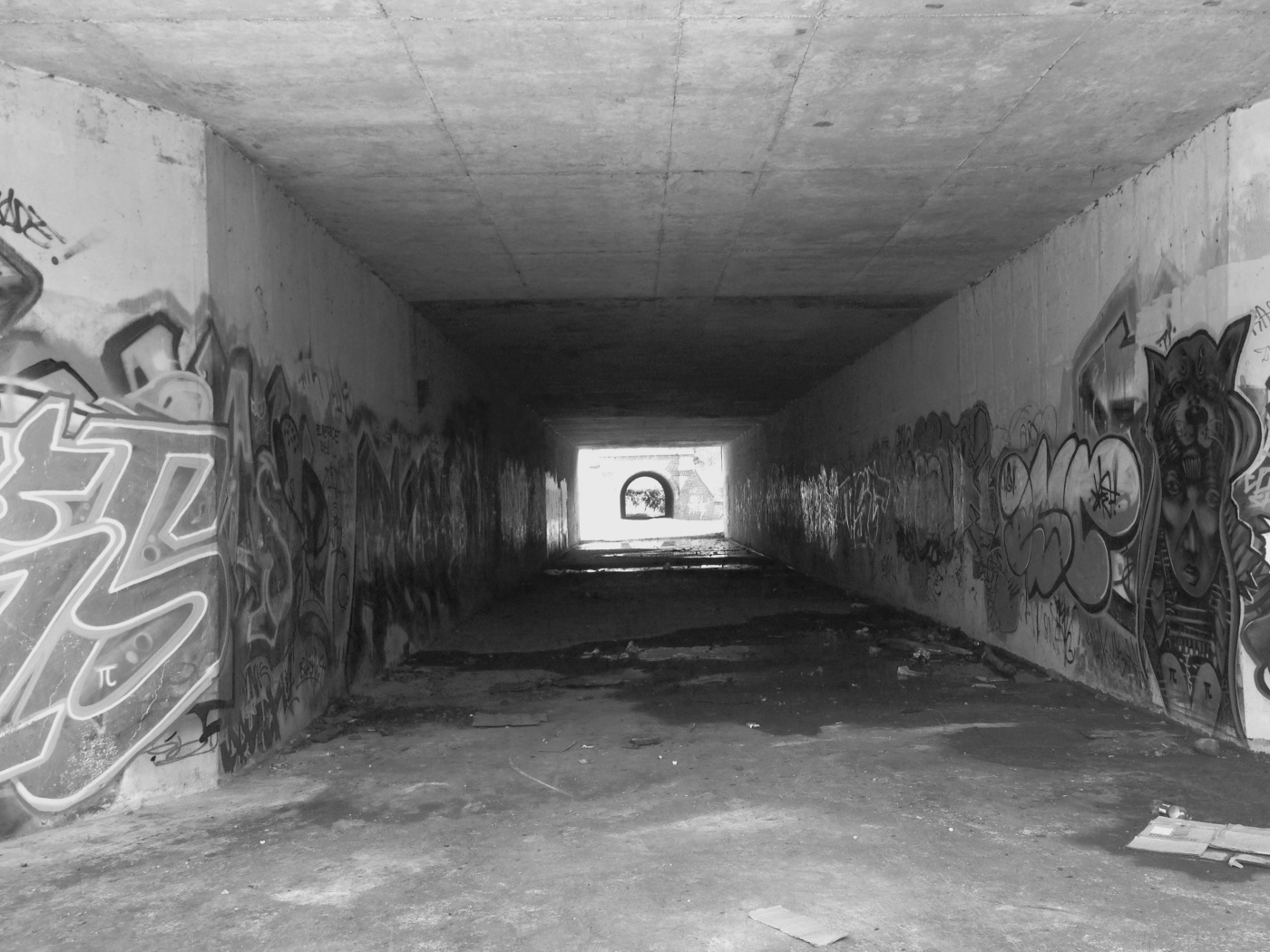 This strange and graffiti-covered space is a mystery to me. I’ve investigated online, and try as I might, I’ve been unable to find much information about this tunnel… I’m not even sure it should really be called a tunnel, because it doesn’t actually go anywhere! It’s a disused underpass to nowhere – it looks normal enough at first, just another underpass linking two estates together – but about halfway down you realise that you’re not going to come out on the other side of the road, you’re walking to a dead end.

There are a few web pages mentioning it as a good spot to use for photography, and it’s a very good venue for light painting. (In fact, I borrowed the name ‘looking tunnel’ from a photography gazetteer website because it was such a perfect summary for what you instinctively do when you get to the dead end of this unsettling spot.) However, any information about why it’s there, where it was supposed to go, what it was originally designed for – no-one seems to know. From the map view, there’s a lake very close by on the other side which makes its existence even stranger. Why build it at all?

I first came across it back in April 2016, when I was on a lunchtime explore around Caldectotte Lake. It was a Friday and no-one was waiting for me to get back urgently, so I took a different route back and ended up here. I knew I was getting close to Simpson Village, and thought that the underpass must be a short cut in that direction. (My sense of direction is rather terrible.) I was fascinating by the dense graffiti depicting particularly disturbing subjects. A grinning goblin leered at two nude sirens by the entrance, and further along, psychedelic rosebushes and chessboards suggested a twisted Wonderland. I noticed that there were no waylights embedded in the walls, unlike the other underpasses nearby. Water dripped from the ceiling, making mirror pools to reflect the sunshine at each end. A flash of unease prickled down to my fingertips, deepening into real fright when I got to the end of the tunnel and found that rather than letting out onto another estate, it terminated in a smooth wall that curved up, way too high to climb. Looking up, all I could see was sky. I looked behind me to check that I was alone, thinking how easy it would have been to get mugged in that place with nowhere to escape, nowhere to run.

I always make sure I have a way to keep in touch with the rest of the world when I’m out exploring, but most of the time I do explore alone. MK is generally a very safe and friendly place but every now and then a space gives me a genuine scare, and this is probably one of the most unsettling I’ve visited. On that first visit, there were a couple of bundles of fabric at the end of the tunnel, and bits of metal lying around. Empty cans and bottles, as you’d expect, and particularly disturbing was the worn wooden hammer that was sitting propped up against that curved wall at the very end of the tunnel. It looked old but very clean, and I could only wonder about why it had been left there. Similarly, on my second visit I found a child’s toy car, broken and abandoned near the tunnel entrance. It looked new, but the smashed wheel meant that no-one was ever going to want to ride that again.

As you can see from the photos from that first visit compared to the later one in 2017, graffiti continues to be laid down here, older pieces becoming obscured over time. The looking tunnel remains a mystery I’m hoping to solve, one day.