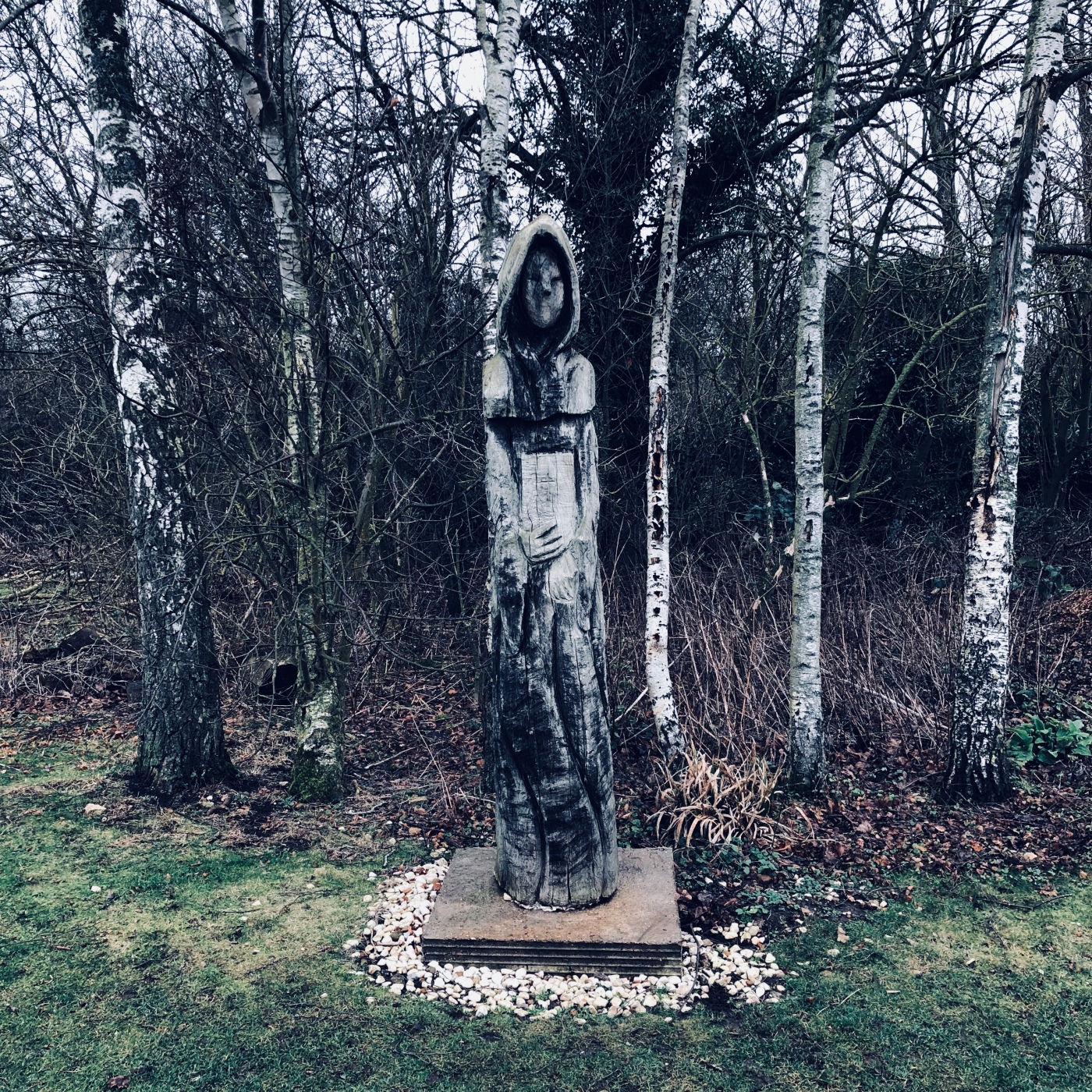 The shot I was taking when I heard the scream

Early in my walk – Great Holm being replaced with ‘Silent Hill’ ? 😉

The first step in my ‘walking guide’ directions

From a distance, this window looked like it was lit insight – it’s just the bricks

Looking up into the repairs

Tattered sheeting rustling in the wind

There really was no-one nearby

Looking back at the chapel

Side door – you can walk right up to this side, but I forgot to try the door – twit!

I wonder when it’ll be unveiled?

To entertain myself, and hopefully entertain others as well, I’m currently pursuing a creative writing course with the fine old Open University. It’s proving to be a fascinating experience, and I didn’t expect to have as much fun as I am, or to be getting such great feedback from my fellow students.

Most of the writing is peer-assessed, but every few months there’s a formal assessment point where we’re asked to put together a few thousand words, and these are marked for our eventual grade. This ‘term’, I’m working on creative non-fiction, which I thought would be a new genre for me, but it’s really the sort of thing I usually write: taking everyday experiences and looking at them from creative or unusual angles. I’ve decided that this assignment piece is going to take the form of a guided walk around one of my favourite spots, interspersed with me reflecting on architecture, hauntology, Freud’s Doppelgänger theory, psycho-geography, the memory of places, all sorts of things. Today, I set off with my good camera to take some pictures to illustrate the story and add to the ‘guided walk’ vibe.

The walk takes you from the side of Lodge Lake, along the Loughton river valley and up to Bradwell Abbey. The lake is one of the city’s balancing lakes, built back in 1981 and used to absorb heavy rain so it doesn’t flood the surrounding estates. We’ve had a lot of rain recently and the overflow weir was in full flood, incredibly noisy. It was a foul weather morning, one of those that felt like it was just not going to bother getting light. It was only determination and a looming deadline that forced me out of the door, and as I set off along the river, cold rain splattered down and misted the camera lens. I plodded along to the end of the valley, where a tunnel under a railway bridge heads off to the right and the abbey to the left. Well, that tunnel itself is a delightfully eerie location, and I had been looking forward to taking some photos there but alas, renovations were underway. I’ll have to head back in March.

Still, the abbey was the real goal so I stomped over the bridge over the fishpond, and greeted the ominous wooden statue of a monk who guards the entrance. There’s a small complex of buildings next to the priory, including a crèche and a local history museum, but the only person I could see was a gardener who was chopping down small birch trees near the museum entrance. The clouds were getting ever darker and the wind had started up, causing the leafless willows that border the priory to creak and groan to themselves. The chapel has been bristling with scaffolding for the last year or so while repairs take place, and the upper windows are all shrouded in white plastic. I expect the intention is to protect the stones from the weather, but over the months the sheets have been pinched and plucked by the elements. The plastic is now starting to rip in places, leaving tattered shreds thrashing in the wind.

I walked around behind the chapel, snapping away from every angle. I’ve visited here a few times, but never actually been inside. Last year, there was supposed to be a guided ghost tour on Hallowe’en which I was really looking forward to, but it was cancelled at the very last minute. I never did find out what the unforeseen circumstances were. I circled round to where an ancient stone wall divides part of the grounds from the rest. The gardener had finished chopping and was now feeding branches into a shredder, and every now and then, a train would thunder past. I was leaning on the wall to steady the camera and get a good shot of the chapel’s front door and main window when I heard, very distinctly and clearly, a single, loud scream.

If only I’d been using my phone, and taking live photos, I’d have had a recording, but as it is, all I’ve got is the old-fashioned photo I took at the moment of the scream. It looks exactly the same as the one taken before and the one taken afterwards, as you’d expect. I looked around me, of course, but still, the only person in sight was the gardener, and the shredder was still running, coughing and spitting out chunks of bark. I stood still for a moment, listening as hard as I could but there were only the everyday sounds I’d heard before. I continued my circuit around the chapel, and took several more pictures, but I was definitely feeling rattled. Silly ideas occurred to me: could it have been a disgruntled toddler in the crèche with unusually good lungs? Or perhaps one of the workmen on the tunnel renovations had had an accident and cried out? Or worse, could someone have taken a dive onto the railway tracks…? I ruled them all out as I walked home – I passed the crèche and all the windows were tightly closed, clearly double glazed. The workmen were still milling about, exactly as they had been when I passed them earlier, with none of the urgency I’d expect if there had been an accident. The only pedestrian access to the railway line is a lot further along from where I’d been standing. I was out of explanations.

As I know from the reading I’d done for my assignment, there has been a settlement at Bradwell Abbey since the 12th century, and the chapel, (St Mary’s chapel, actually) is supposed to be haunted by shadowy monks who roam the ruins of the Abbey at night. A paranormal investigator has even had a go at recording activity there. I’d gone out looking for source material for an essay about the potentially haunted nature of MK. I never expected to come home with a story like this to tell…